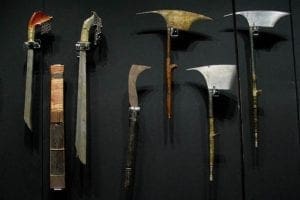 WHAT’S IN A NAME?

Welcome to the first of hopefully many entries into this blog. I would like to start things off by addressing the reason why I have chosen to call this blog Martial Science Forum. As some of you who know me personally or have trained with me, my passion is the Filipino Martial Arts – Balintawak in particular. In FMA circles, some of my friends have taken to calling me the Professor due to my hyper analytical nature and overall zeal for digging deep into the history, tradition, and mechanical theories of what we do. However, my experience is not limited to FMA. I also hold instructor ranks in Japanese and Chinese arts, have done a good deal of training in JKD and Wing Chun, and I hold two bachelors degrees in History and Anthropology. Over the years, I have applied the same level of academic focus and scrutiny to my martial arts training and study; it is this type of analysis that I will attempt to convey in this blog.

One of the things that I look for in a particular style and instructor is how their art is expressed and how effectively an instructor can convey it to their students. Throughout my time training, I have arrived at one major realization which informs all of my continued training and teaching: All martial arts can be broken down and expressed in terms of Geometry, Anatomy, and Physics. In fact, I would almost consider this an obsession. I always attempt to figure out what is “under the hood” of any technique or style. Understanding how and why something works greatly facilitates learning and competent performance.

The first and most apparent concept is the importance of Geometry in the study of FMA in particular. Because the Filipino fighting arts are primarily weapons based, the student can see the interplay between angles of attack and lines of defense and how they intersect creating entry/reference points for techniques from day one. On a fundamental level, there are only a limited number of ways in which someone can attack with a weapon or empty-handed. These are limited to horizontal, diagonal, vertical, and straight lines. Once a student arrives at an intrinsic understanding of this, the thing to understand is how to close off the target lines. Additionally, the patterns of footwork (linear, lateral, triangular, etc.) and positions (inside, outside, center, split) in which the student may find him or herself are also geometrically rooted.

Anatomy, in its relationship to the Filipino arts, can most easily be expressed in the simple axiom of stick seeks bone and blade seeks flesh. A skilled fighter should also be a student of anatomy with a functional understanding of operation of the muscular, skeletal, nervous, and circulatory systems to better understand how to exploit those in combative situations – especially when weapons are involved. In FMA, a basic application of anatomical principles can be seen in the core principle of defanging the snake with either bladed or impact weapons. Defanging the snake is simply striking the opponent’s attacking limb in hopes of incapacitating it either momentarily or permanently. The mindset here is viewing the opponent’s limbs not as weapons that can harm, but rather targets you get to hit.

In defanging the snake, the targets for the blade will be flexor tendons and muscles that allow for the gripping of an object in their hands as well as articulation of the targeted limb, while an impact weapon should be directed to the fingers, wrist, elbow, and knee joints. These principles are also utilized with empty-handed defensive applications of limb destructions which I will likely cover soon, as I have received many questions on this topic.

Physics is probably where there is the most diversity across the gamut of martial arts systems. The application of Physics in most martial arts is applied to the generation of power in striking. Basic Newtonian physics states that Force = Mass x Acceleration. System-specific postures and stances will greatly affect the application of power-generating principles. For example, a system like Wing Chun uses a squared off stance and therefore utilizes a forward-driving action to deal damage. Compare this to Western Boxing, which utilizes a more bladed stance and relies more on hip rotation, primarily with forward driving motions coming in second. Even the more esoteric systems that discuss metaphysical concepts like “internal power” can be “dummied-down” as analogies for the empirical principles of physics. Regardless of how it is expressed, the faster and more efficiently you can accelerate your body’s mass will directly affect the amount of force imparted to a target. Additionally, understanding how your own anatomy plays into this is highly important to developing fast, efficient, powerful hits.

In FMA, all three of these concepts are applied in unison to the proper application of technique. Referring back to the simple application of defanging the snake, you can see all three concepts in motion. Below, I have provided a brief video of this and other applications of this concept with the blade. The attacker presents an angle to which I (the defender) respond by targeting the attackers flexor tendons with the correct intersecting angle. My options here are to fall back in a 45-degree direction to place myself safely outside the arc of the attacker’s weapon, or at times, I move forward to get inside the arc past the “danger zone” of the edge orientation while being mindful of my opponent’s left hand.

The defensive strike is delivered with proper body mechanics to ensure the highest degree of damage possible to the attacking limb. In this case, I am using the left hand to assist in my cut by passing the attacker’s limb over the edge of my blade in a “scissor” type motion.

The 2, 3-4, and 6 count follow-ups that I demonstrate are not Gospel. Rather, they are designed to develop the student’s ability to recognize options for “follow up” attacks based on their position in relation to the attacker as well as the attacker’s options based on how well the student has applied their anatomical, geometrical, and physical principles. In actual blade encounters, the likelihood of pulling off any of the longer follow-up counts is slim. This training progression should be seen as a series of physical exercises to teach decisive and fluid striking with proper defense, accurate targeting,  and positioning.

One final note on targeting: You may be wondering why I am not performing any follow-on attacks to my attacker’s torso. This is because I have deliberately designed this progression to be performed with a short knife, such as a tactical folder. In many cases, a 3-4 inch blade lacks the “stopping” power when utilized in attacking the torso. If an opponent is wearing thick clothing, is overweight, or in the cases of military and law enforcement, may be wearing body armor, the only viable targets for attack are the eyes and throat. The only time you will see a torso attack in the progression is on the 4 Count. It is used as to harass the opponent to allow for transition to the next cut. The torso cut can also be delivered to the thigh level.

Some may argue, quite correctly, that there are many other factors like timing, rhythm, distancing, feinting, etc, which are crucial in combative encounters. But in my opinion, the principles of geometry, anatomy, and physics are the more important to developing a student’s basic functional understanding and performance of any technique or art. Without this understanding, the student’s movements are robotic and empty.

With this Martial Science Forum, I am aiming to provide detailed in depth analysis of topics in Filipino and other martial arts, as well as opine pieces looking at various topics in martial arts training, history, tradition, and even pop culture. I hope you all enjoy!

-Guro Jerome Teague (aka The Professor)

In the famous portrait of Socrates, we are presented with the image of what END_OF_DOCUMENT_TOKEN_TO_BE_REPLACED

“Flow” is something that we talk about a lot in the martial arts. It END_OF_DOCUMENT_TOKEN_TO_BE_REPLACED