Counter Blade Tactics (CBT) is Guro Jerome’s personal blade and combatives curriculum. The program is designed to take students from zero to proficient in a short period of time. The program has three areas with multiple levels of emphasis in each. The structure of the program is based on the military concept of Immediate Action Drilling (IAD). Under stress and pressure, higher-order cognitive processes are severely diminished. The only response that you can hope to muster is the one that has been constantly and properly drilled. While this approach is not revolutionary to martial arts, it is something that many modern FMA styles are losing in favor of artistic expression and visual appeal. As such CBT should not be regarded as a martial art,  rather a direct, no-nonsense, and non-superfluous approach to the blade and general weapon’s based combatives. 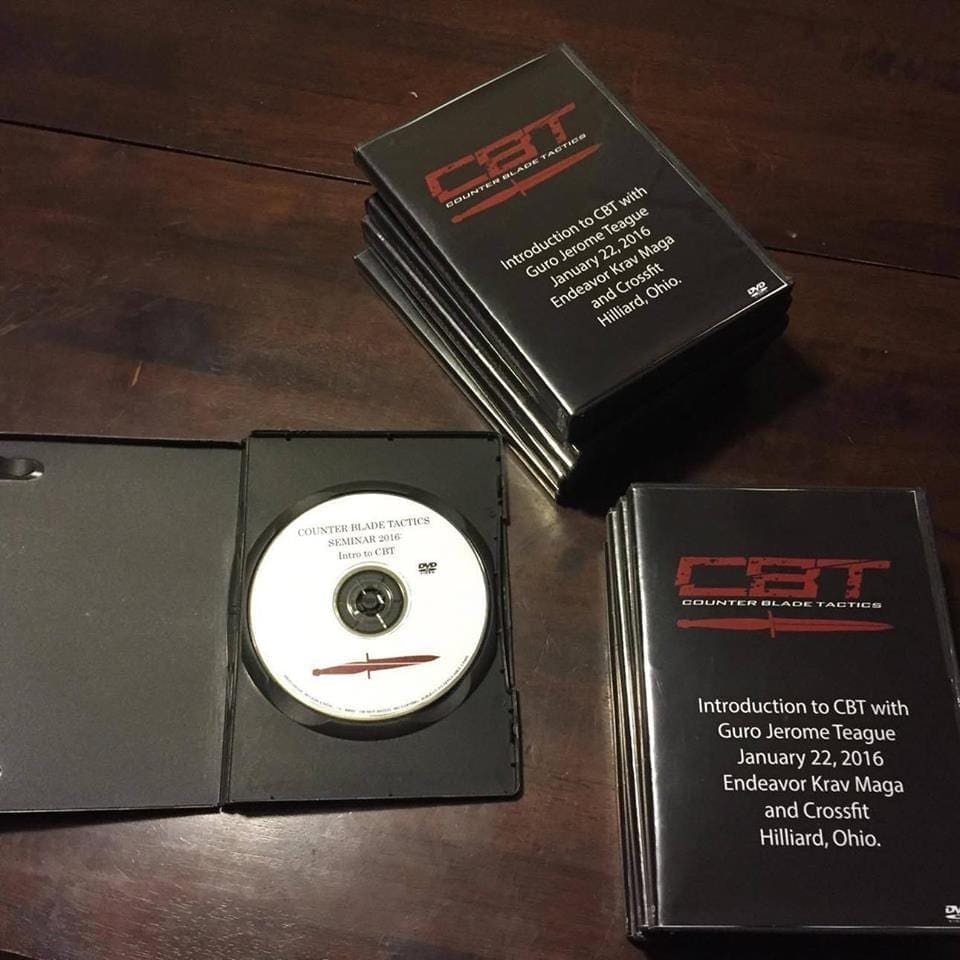 “Do nothing that is of no use.” Miyomoto Musashi (Book of 5 Rings)

Section One: Blade Against Blade

“Every battle is won or lost before it is fought.” -Sun Tzu

“Speed is the essence of war.” -Sun Tzu

Students are introduced to the basic footwork, angles of attack, anatomical concepts, and a series of 4 defensive sets to teach them the most straightforward approaches to countering bladed attacks with direct counters to the neck and eyes of the attacker. The core of CBT is the principle of training how you will fight. If you are fortunate to have a blade in hand it will likely be around the legal limit for day-to-day carry. This length is typically 3.5-4 inches. Therefore, the high pay-off targets that are accessible to blades of this length are limited to the anatomical structures of the neck and eyes. This approach is designed to remove the threat as quickly as possible.

Next, the student is shown a series of follows and counters to common responses to their attacks. This section covers limb destruction, clearances, trapping, arm drags, and grip breaks. The student will also be instructed on reverse grip tactics and applications for meeting and following the force applications.

In the next section, students will learn to apply all of the materials and principles previously learned in a continuous feeder-based drilling format (Balintawak Palakaw). In this method of training, the feeder will present the receiver with a continuous volley of attacks and incorporate the various defenses to force the receiver’s counter randomly and in real-time.

The final area of the Blade to Blade section introduces the student to the application of Direct Defense (aka Sword and Shield Method). Once the direct defense applications are learned, they are then drilled in a random Counter for Counter (Sumbrada) style drill. When both students are moving proficiently and safely, they will then mix in all the other defensive applications.

In this art, the student learns the 2 major approaches to going against the blade with empty hands. The focus of the first phase of this section is the 2 primary entry defense and counter methods when unarmed against a blade-wielding attacker. These are referred to as catch and hit and hacking redirect.

Next, the student focuses on the catch and hit application and learns a series of progressive techniques against each angle from the standard and reverse grip attacks. Once the student is proficient with the entry and techniques, they are then drilled in a continuous feeding format (Balintawak Palakaw).

Then the student will be introduced to the redirecting method and associated softening strikes and disarms/techniques in a simplified 13 count flow. Once this is perfected the student will be fed and expected to perform the entry and techniques without resistance and then with the feeder attempting to counter the defense and technique through the methods presented in Area One.

In the final stage of this section, the student will mix all the entry methods, softening strikes, and techniques in flow with the feeder attempting to counter.

This is the shortest area of the CBT curriculum. If the student has been diligent in training and has a firm hold of all the technical concepts in the two previous sections of training, they will be easily equipped to utilize the blade as a defense tool in a variety of scenarios.

The basic elements of this section are drilled in a continuous feeding drill in which the feeder is permitted to attack in any fashion with hands and feet. Next, the student will practice a continuous clearing drill with their partner providing obstructions and giving various attack and defense counters that the student must address in flow.

Finally, the student will be introduced to various applications of additional and improvised weapons and how to utilize them in accordance with the CBT curriculum materials. (ie Firearms, Baton, Karambit, Tactical Flashlight, and Tactical Pen). 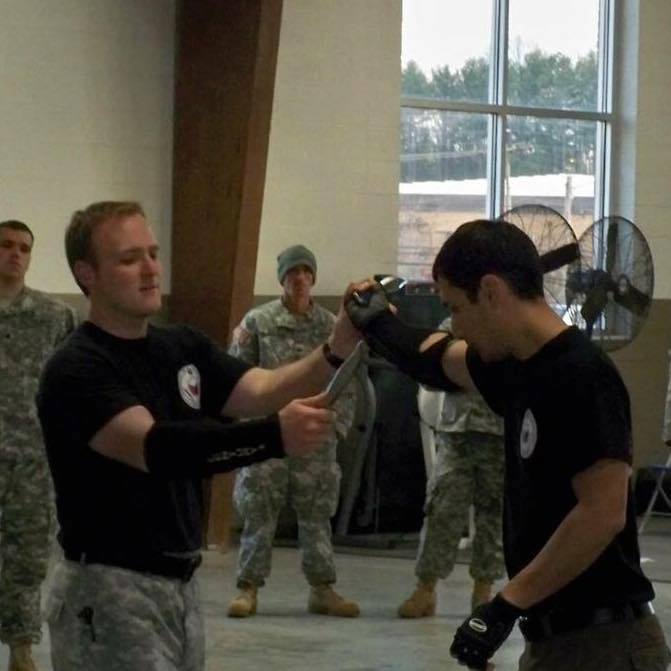 The curriculum will be customized to the training SOP and ROE  of individual units/ departments.

2.) Close quarters deployment and engagement with primary weapon system against a blade-wielding attacker.

3.) Weapon retention from holster and hand

Guro Teague is also available upon request for individual firearms training in which he will cover a variety of topics including; basics of pistol, rifle, and shotgun marksmanship, various reloads, cover vs concealment,  and general tactical movement applied to various scenarios. 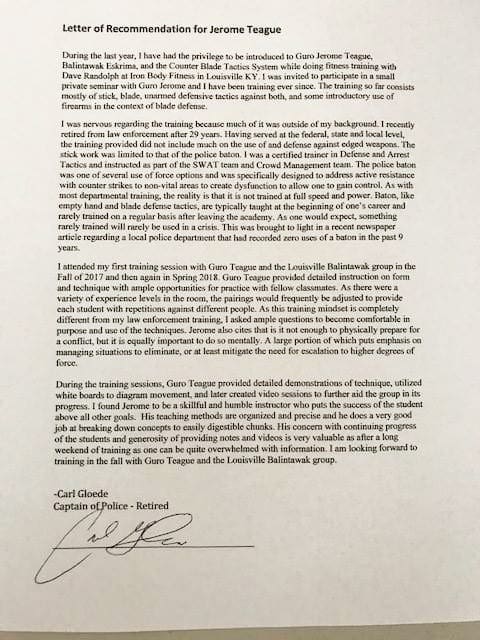 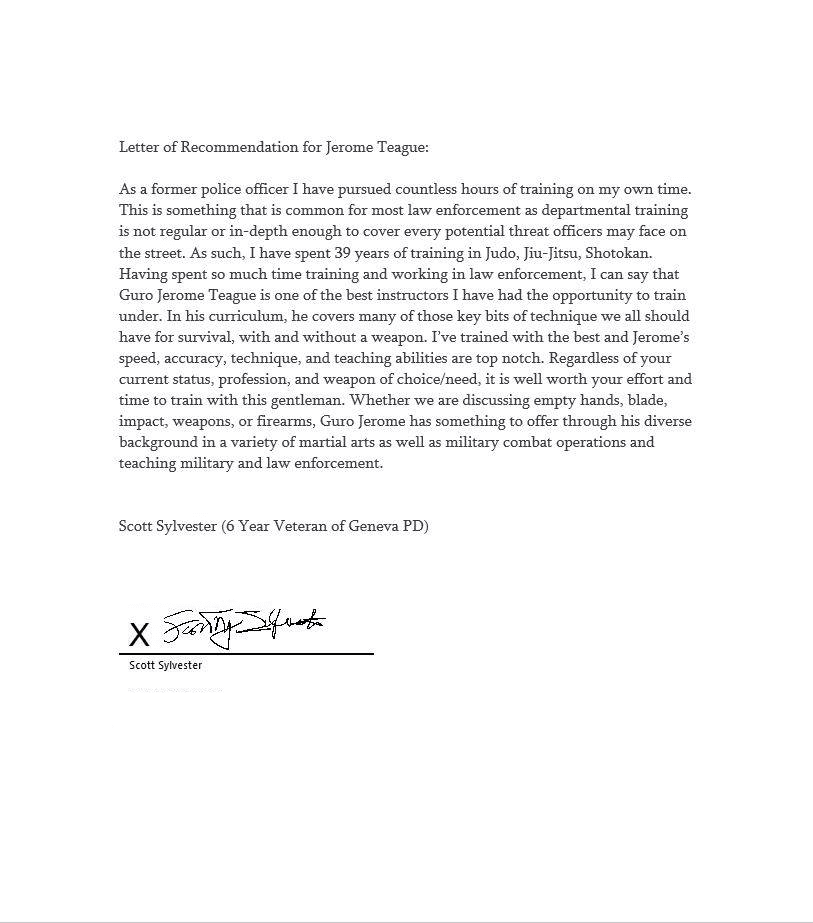