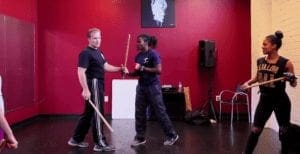 Eskrima is one of 3 general terms for the weapons based martial art systems of the Philippines. Also known as Kali and Arnis, the martial arts of the Philippine archipelago are among the most sophisticated in the world. The Filipino martial arts (FMA) are as rich and diverse as Filipino culture itself. The word Eskrima is derived from the Spanish term esgrimir, which means to wield or fight with weapons. Arnis (Arnis de Mano), comes from the old Spanish term armas which roughly translates to skill with weapons. Both Eskrima and Arnis are used widely throughout the Philippines as general terms of reference for the Filipino Martial Arts. Some other less common terms for referencing the arts are: Pananandata, Estoque, Estoqui, Estokada. Many empty hand styles also exist and are known as: Panantunkan, Suntukan, Pangamut, Sikaran, Layog, Dumog, Buno, Silat, Kuntao, and others, depending on region and time period.

Kali is not so easily understood. There are at least two explanations to the origin of the term. But the term, as it is commonly used, does not exist in the Philippine language. The first is potentially a dialectic corruption of the name of a sword on the part of the Spaniards during the colonial period, 1565-1899. It is possible that kriss, keris, or kalis could have been misunderstood through the centuries of Spanish occupation resulting in the nomenclature we use today, Kali, generically called the bladed art of the Philippines. Kali is sometimes referred to as “the mother art” but this is highly controversial and wildly speculative. The likelihood that all FMA came for one original source does not hold up to academic scrutiny. However, it would be fair to say that the modern interpretations of FMA have their roots in much older blade based battle field methods. It would be more accurate to say that there is not a singular mother art, but more likely a similar core set of principles and philosophies at the root of all FMA.

Perhaps the most widely held explanation of the name Kali was first coined in the US by GGM Floro Villabrille, GM Ben Largusa, and continued by Guro Dan Inosanto. In the Villabrille-Largusa system of Kali, Kali is explained to be a construct of two Visayan words, kamut and lihook. Kamut translates to hand and lihook translates to motion, so Kali can be understood as combative hand motion. Kamut Lihook gives a window into one of the core principles of FMA that is also common in the European martial arts systems as well. The idea of “combative hand movement” is understood to be that regardless of your weapon configuration (stick, long blade, empty hand, etc.), your movements and tactics will remain the same. In this way a practitioner can use a wide array of weaponry without much additional training or modification.

A student of FMA could expect to become proficient in a variety of traditional weaponry. Some of the areas of training include:

This will vary depending upon each system…

As evidenced through the many languages spoken in the islands, the Philippines have been the epicenter for cultural confluence since at least 800AD. From various waves of Malay and Indonesian migration, Chinese and Indian traders, and later Spanish, American, and Japanese occupation, many cultures have left their mark on the people and cultures of the archipelago.

In the 1946, shortly after the end of WWII and the expiration of the Tydings-McDuffie Act, the Philippines were granted their independence from the United States. The notion of a unified country called the Philippines is only 65 years old. As such, many groups founded on principles of political, religious, and ethnic separatism exist in the islands. This makes some parts of the Philippines some of the most dangerous places in the world. This fact is reflected in the necessity for such an efficient family of fighting systems. FMA is one of the top cultural exports of the Philippines and overall it plays well into a national Filipino identity. With a history of occupation by and resistance to foreign powers, the practitioner of Filipino Martial Arts is participating in a warrior tradition founded on courage in the face of battle and potential annihilation.

General Douglas Macarthur once said, “give me one million Filipino soldiers and I will conquer the world,” and I for one believe him.

In the famous portrait of Socrates, we are presented with the image of what END_OF_DOCUMENT_TOKEN_TO_BE_REPLACED

“Flow” is something that we talk about a lot in the martial arts. It END_OF_DOCUMENT_TOKEN_TO_BE_REPLACED