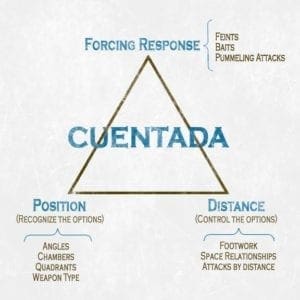 Balintawak Eskrima/Arnis is the term to refer to the modern family of systems that developed through the direct tutelage of Venancio Bacon, founder and Grandmaster of the Balintawak Club. Bacon was a student of the legendary Lorenzo Saavedra, a man considered to be one of the founding fathers of Cebuano Eskrima. The Saavedras were at the helm of the founding of the first organized Eskrima club called the Labangon Fencing Club in 1921. Upon the dissolution of Labangon, the Saavedras and Canetes along with Bacon and other Eskrimadors formed the Doce Pares club in 1932.

Over time, various factions and opinions within the club led to Bacon separating to form the Balintawak Club in 1952. Bacon sought to train the best Eskrimadors in all of Cebu and chose to focus solely on the single weapon configuration in the close-quarters as opposed to the various long-range methods and multiple styles taught in Doce Pares at that time. The benefit of the close quarters single weapon method is that the practitioner’s left hand is free to engage in various tactics like striking, holding, pushing, pulling, scratching, and eye-gouging. Many of the techniques of Balintawak are considered “dirty play” by many Eskrimadors, but were and still are well suited for practical self-defense.

The primary training principle that guides Balintawak training is Cuentada. Cuentada literally translates as, “to do by calculation.” In the Balintawak systems, Cuentada is what gives purpose to the various methods of Balintawak training. The specific application of the principle refers to countering an opponent’s attacks/techniques and being able to counter his counter to your’s. Under the training principle, the student drills and practices to develop an intimate knowledge of position and options. Here, the practitioner is calculating his own options as well as that of his opponent.

This is a slow process and must be undertaken with great care and under the guidance of a skilled instructor. Over time and through constant analysis, the practitioner will begin to recognize various options and potentially be able to be one, two, or three steps ahead of an opponent and able to counter any attack or technique. At the highest level of Cuentada application, the practitioner can control the opponent with feints, baits, false openings, footwork, pushing, pulling, and pummeling attacks to set the opponent up for defeat, because they can calculate the most logical responses thus allowing them to be 2-3 moves ahead. It is like a game of chess played in fractions of seconds on a subconscious level.

The only way to develop ability in Cuentada is through constant, attentive, deliberate, and realistic practice. Without it, a student’s abilities will merely be reactive, and reaction is always slower than action. This is likely the reason why Balintawak styles, despite their effectiveness are not as ubiquitous as other styles of FMA. In today’s day and age where most seek martial arts as a hobby or physical activity, the vast majority of prospective students are not willing nor able to endeavor for mastery in an art that requires so such mental and physical commitment. However, as any Balintawak student can attest, it is well worth the investment as these methods have far-reaching benefits extending outside of the limited sphere of just Filipino Martial Arts.

Balintawak is first and foremost a defensive art. This is not to say that it is passive, to the contrary, offense is most often the best defense. However, in the early stages of training, the student’s defensive abilities are the primary focus. Balintawak philosophy assumes that an individual already knows how to hit. Although the student will receive further instruction on proper body mechanics for fast and powerful strikes, the ability to block an opponent’s incoming blows takes precedence in a majority of training with everything expressed in terms of defend and counter with powerful and decisive intent. Without a firm root in this skill set, a student should not expect to be able to perform any techniques like locking, trapping, or disarming.

The Original Balintawak training method was an unstructured and random drilling format. Bacon would give his students the “on guard” command and then proceed to bombard them with attacks, all the while giving them corrections or commands on how to defend. If a student could not perform a defense or counter correctly, Bacon would flow back to the position to allow the student to get it right. Bacon’s ability to blend and adapt in free flow earned him the nickname, the “Mozart of Eskrima.”

Bacon’s ability to defend, counter, flow, and instruct was difficult for his students to duplicate when Bacon first instructed them to teach the art. The resolution to this problem came when his students Teofilo Velez and Jose Villasin, with Bacon’s blessing, standardized the basic components of the art and developed the Grouping Method. In Grouping, the student is drilled in a standard order and later non-standardized order feed with the addition of a set group of techniques delivered by the instructor that they must respond to in flow. The Grouping Method allowed for the instructors and students to keep track of the progression of techniques and responses.

The standardized Balintawak training method is expressed in 3 key terms: Agak (to guide), Palakaw (walking), Padagan (running through). In Agak, the student is guided like a child that is first learning to walk. Here they are introduced to the basics of the art including stance, structure, the basic strikes, and set defensive responses. In Palakaw, the student is drilled with ever-increasing speed and to further pressure their physical and mental faculties with little guidance from the instructor. The next stage was the Padagan where the student could drill with the instructor at high intensity, interval, and with little to no guidance. Gradually more and more techniques and attacks (Groupings) will be added.

Throughout the entire process, the student is developing their ability in Cuentada through constant exposure to the visual and tactile cues to their trainer’s options for strike and defense from a variety of positions. Ultimately, the instructor/student roles fade away and the student is now practicing in what is called Sana-Sana. Here, both parties are defending and countering each other’s attacks in a free flow and non-patterned format. Over time, and with lots of practice, the Standardized method produces practitioners of similar skill and ability as the Original processes utilized by Bacon. Some popular systems that utilize this method are Taboada Balintawak Arnis Cuentada, NNG Balintawak, and Nickelstick Eskrima, while others like the Tabimina Balintawak favor the original ungrouped/ random feeding method.

As an instructor in Balintawak (Nickelstick and Applied Eskrima), I always encourage my senior students to integrate the core movements of all our drills into a randomized feeding format to be better trainers for their juniors. This is often easier said than done. This is part of the challenge of teaching a system that falls into the highly technical and sophisticated Balintawak family of arts. However, in my relatively short time instructing and training, I have progressed to a higher degree of skill than I ever thought possible. As all the Grandmasters, Masters, and Guros will attest, a little Balintawak goes a long way!

In the famous portrait of Socrates, we are presented with the image of what END_OF_DOCUMENT_TOKEN_TO_BE_REPLACED

“Flow” is something that we talk about a lot in the martial arts. It END_OF_DOCUMENT_TOKEN_TO_BE_REPLACED