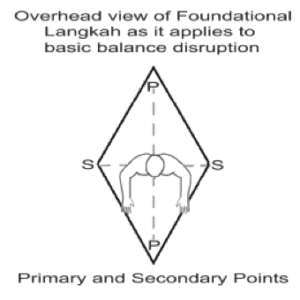 OFF BALANCE AND IN PAIN: The subtle art of breaking bones and knocking people down.

A while back, I enjoyed attending Guru Mike Casto’s Stealing Bases Seminar in Louisville, KY. I have worked with Guru Mike in the past, tag-teaming a Nashville seminar and attending a small workshop with him on balance breaking in Alabama. Guru Mike is the founder of the AGPS system of Silat, which is the culmination of Guru Mike’s 35 years of extensive training in Pencak Silat, Tai Chi, and FMA. AGPS stands for Anjing Gembala Pencak Silat. Anjing Gembala translates as “Sheep Dog.” This reflects Guru Mike’s personal philosophy, in which practitioners of the martial arts should utilize their knowledge and experience to protect not only themselves but also others. The sheepdog philosophy is one that I very much share as a combat veteran of the US Army.

In addition to admiring how well his system is arranged, I really enjoy training with Guru Mike because he conveys a number of high-level concepts, bordering on the esoteric and into simple terms and mechanics, making them easy to understand and perform. Guru Mike’s mind works a lot like mine, which has drawn me to studying his system. I always want to know the whys and hows of the way things work. My early encounters and brief conversations with Guru Mike encouraged me that I was on the right track with some of the things I was emphasizing in my personal training and teaching.

Over the years. I have become fascinated by the similarities of various martial arts in terms of the physical and geometrical principles of how they work. What I have discovered is that it is all truly the same. It is up to the instructor to convey it and make sure the students are properly training it. I have developed my own geometrical diagram that is an amalgam of what I learned in Japanese (Jupposesho), Chinese (18 Hands/ Universal Pattern of Motion), and Filipino Arts (with Spanish Destreza influence). I tried to combine, pressure test, and simplify as best I could, and the results have been excellent. Meeting and training with Guru Mike has served to refine and reinforce much of my personal approach.

10 years ago, before I started pursuing the SE Asian Arts full time, I was studying and assistant instructing in Japanese Budo Taijutsu. This was the first time I had the opportunity to work with Guru Mike. At his workshop in Alabama, he discussed the concepts of balance disruption in pure, geometrical terms. Some of the balance-breaking lingo of AGPS consists of primary points, secondary points, and blended points of balance. Having these basic concepts to apply in the analysis of techniques, my progress in Japanese Arts, joint manipulation, and grappling skyrocketed. I also attribute these experiences with Guru Mike to my successes in FMA.

In Louisville, Guru Mike presented the essential skills of balance disruption utilizing the diagram of AGPS’s Foundational Langkah. This simple geometrical diagram is the key to unlocking the functionality of many of the techniques and footwork that make his system so effective. However, this diagram can be applied universally to any martial art. We started with a few simple exercises to illustrate the primary and secondary balance points. These exercises consisted of utilizing our partner’s arm to direct them into the “sweet spot,” at which point their skeletal structure and balance were compromised.

In the 3 dimensional representation of the primary balance points, the opponent’s head is directed to a point extending out from the center of their feet either to the front or rear, depending on the particular technique’s application. As Guru Mike often states, he is constantly seeking empties and filling them. If an opponent is fighting for balance, then he is not fighting you.” This statement has broad-reaching applications, but in this context, we are affecting the opponent’s structure and filling the empty space along these lines, which will result in the opponent being off-balance or being taken down. Additionally, Guru Mike looks to fill the “empties” in the opponent’s structure and timing with hits. When you combine these principles, you arrive at Guru Mike’s overall goal, which is to have the opponent “off-balance and in pain at all times.” 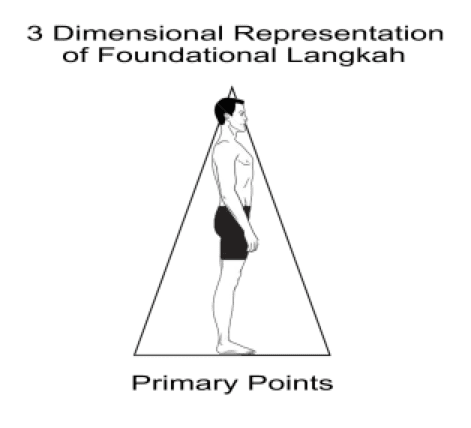 The secondary points are used when your actions take an opponent’s balance over either of his legs laterally. In the event of the opponent taking a step to correct their balance, they will often leave a leg vulnerable to sweep, knee, or kick. However, if the initial movement failed in the application we utilized, we changed the angle slightly, forcing the opponent’s head just over their knee forcing a dynamic breakdown of their spinal alignment.

NOTE: These diagrams are a symbolic representation of the angles for balance disruption. The precise angles are contingent upon the width of the opponent’s stance. Above, the figure is standing in an upright natural posture, so the angle is steeper than it would be if they were depicted in a fighting stance. The “sweet spot” for balance breaking is around 45-60 degrees.

Guru Mike then presented us with a handful of pre-arranged technique sets that allowed us to explore and blend the concepts in a functional context. These sets consisted of some classic Silat techniques, including sweeps, head controls, low line kicks, joint locks, and throws. These moves were all integrated with dynamic entries, strikes, and parries to disrupt the opponent’s balance structure before applying the techniques.

Overall, it was fun, engaging, and very interactive. Unlike many seminar instructors, Guru Mike floats freely around the room and gives everyone a little individual attention. Often this individual attention results in you looking up from the ground, wondering what just happened. Guru Mike will then help you up and explain how to make it work and stick with you until you get it. He is a great instructor and a great guy. For more on Guru Mike and AGPS, please visit www.trainagps.com

In the famous portrait of Socrates, we are presented with the image of what END_OF_DOCUMENT_TOKEN_TO_BE_REPLACED

“Flow” is something that we talk about a lot in the martial arts. It END_OF_DOCUMENT_TOKEN_TO_BE_REPLACED